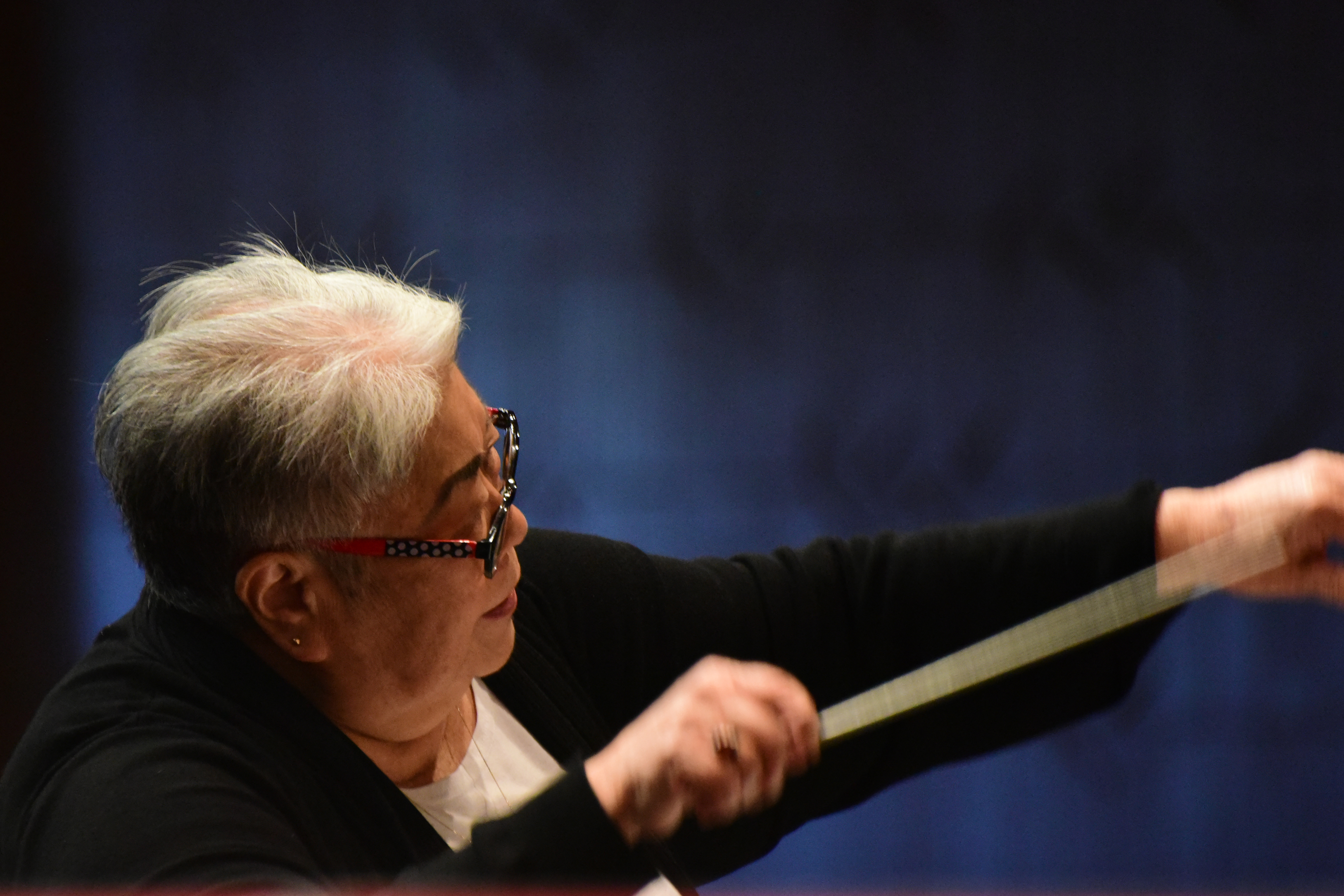 It is with a myriad of emotions that we announce the retirement of Geri Grine as Music Director and Conductor of the Oshkosh Youth Symphony Orchestra. We are so appreciative of what she has brought to Oshkosh and the surrounding communities, yet we will deeply miss the energy, enthusiasm, passion and humor she has brought to rehearsals and concerts. Geri will continue in an advisory role for the conductors as well as serve as a member of the OYS, Inc. Board of Directors. Mahalo Nui Loa, Geri, for 30 years of beautiful youth symphony music in Oshkosh!
In 1987, Geraldine Otani Grine became the Music Director of the Youth Symphony in Oshkosh. Since then, she has grown the youth symphony program into two orchestras, drawing performers from Winnebago County and beyond. Youth Symphony musicians under Geri’s direction have gone on to perform professionally in Minneapolis, Boston, Milwaukee, Dublin and other cities.
As a graduate of Lawrence University and Northwestern University, Geri has performed as a professional musician and principal clarinetist in the Oshkosh Symphony Orchestra, Green Lake Festival Orchestra, Victoria Bach Festival of Texas, the Tennessee Bach Festival Orchestra, the Paine Art Center Chamber Players, and the UW Oshkosh Faculty Chamber Players among other chamber music and solo performances.
Sharing her love of music with young musicians is one of Geri’s greatest passions. She began educating young musicians in Northeast Wisconsin in 1966, and has been a fierce advocate for music and the arts in public schools. In addition to teaching in the Oshkosh Area School District, she founded the Suzuki music program in Oshkosh and currently sits on the program’s Board of Directors. She was one of the original teachers in the After-School Strings program in Oshkosh for 3rd, 4th and 5th graders, as well as co-founder of the Arts Education for Children Group orchestra program on Maui, Hawaii.  Geri was a member of the first board of directors of the Student Opportunities in Artist Residencies (SOAR) in Oshkosh and a past President of the Wisconsin chapter of the American String Teachers Association. She has been a guest conductor of numerous youth orchestras in Wisconsin and Hawaii and continues to provide services as a youth music and string orchestra consultant. Her professional work includes conducting workshops and clinics, guest conducting orchestra festivals and adjudicating orchestras.
Always a gracious hostess, Geri has organized trips to Hawaii for students and their families, sharing her “hometown,” Maui, as well as other musical experience trips to Chicago, Minneapolis and elsewhere throughout the country. Geri’s enthusiastic desire to pour a love of the arts into young musicians is shared by her husband, Dr. James Grine. Together they received the Rabin Youth Arts Award for Artistic Achievement from the Wisconsin Youth Symphony Orchestras.
Even greater than Geri’s passion for music, arts and youth, is her passion for family. She is a loving wife, devoted mother, adoring grandmother, and dedicated friend to all.
The Board of Directors has requested and unanimously approved Ms. Yukiko Grine as the new Music Director for OYS, Inc. Beginning with the 2018-2019 season, Yukiko will be conducting the OYS Symphony Orchestra. The Board of Directors is currently in the process of selecting our new conductor for the OYS Philharmonia. We will continue to update you on this process.

Transformative Experiences for All through Music